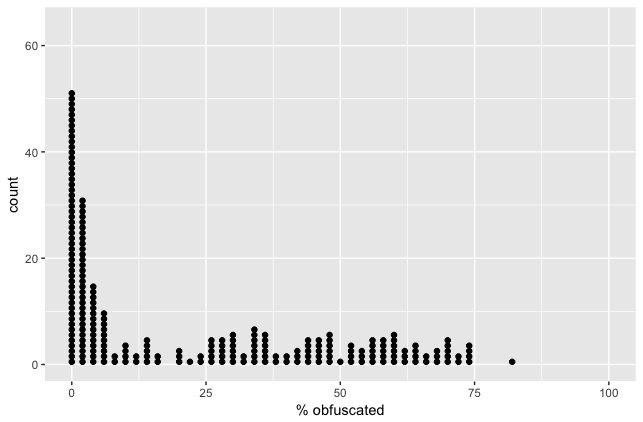 I think it’s important for any app that deals with sensitive user data to incorporate code obfuscation into their security.  While far from impenetrable, it’s a useful layer in thwarting reverse-engineers from understanding your app and using that knowledge against you.  If you’ve wondered why I seem to be on a code obfuscation kick recently, it’s because I’ve noticed, anecdotally, that a lot of apps I expected to be using obfuscation, weren’t.  So I set out to see if I could do some research and turn that anecdote into data.

I took all of the apps I have on my phone right now, and calculated how well the code was obfuscated (see methodology notes at the end of the post if you’re curious).  Here are the points that jumped out at me: Why would an app with ProGuard turned off have a score greater than 0? A small part of that would be due to false positives (see the “Methodology” section, below) but most is due to third-party library code that has its internal implementation details obfuscated, before that code is even packaged into an app.