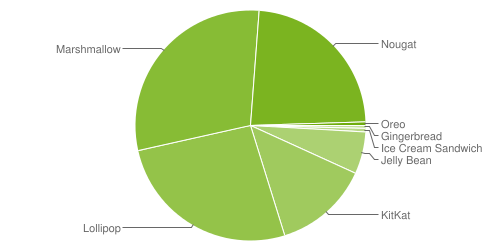 The Android Developers website has a chart showing how many Android devices are on each version of the OS.  You’ve probably seen it before. Each month that chart is updated, and Android-focused blogs expend a lot of words analyzing the changes. [1 2 3]  Broader tech blogs use it to decry Android’s “fragmentation” problem. [1 2 3 4 5]

But I’m here to let you in on a little secret: that chart doesn’t mean what you think it means, and it’s not all that useful.  That chart represents all Android devices, all over the world, that have connected to the Google Play Store in the last seven days.

To show why that group of devices isn’t the data we want, let’s compare that to data from one of my personal apps.  And because I’m a nice person, I’m not going to subject you to another pie chart.

For any Android version on the x-axis, the height represents the proportion of devices that are running that version or newer.  These are the numbers you need to make the important decision of “what is the lowest version of Android that I’m going to support?”  For one example, let’s look at Android 7.0.  The Google Play numbers would tell you that only 23.8% of devices are on Android 7.0 or newer, but for my app, that’s 67.8% — a difference of 44%.  That’s a night and day difference.

There are a lot of reasons that it’s different, but I’ll cover a few:

If you’re trying to figure out what’s the lowest version of Android that you’re going to support for an existing app, make sure you’re looking at data from your app.  I guarantee you it’s going to be different than the public Google Play numbers.  And if you’re starting a new app, try to find a source of data that more closely matches your target market.